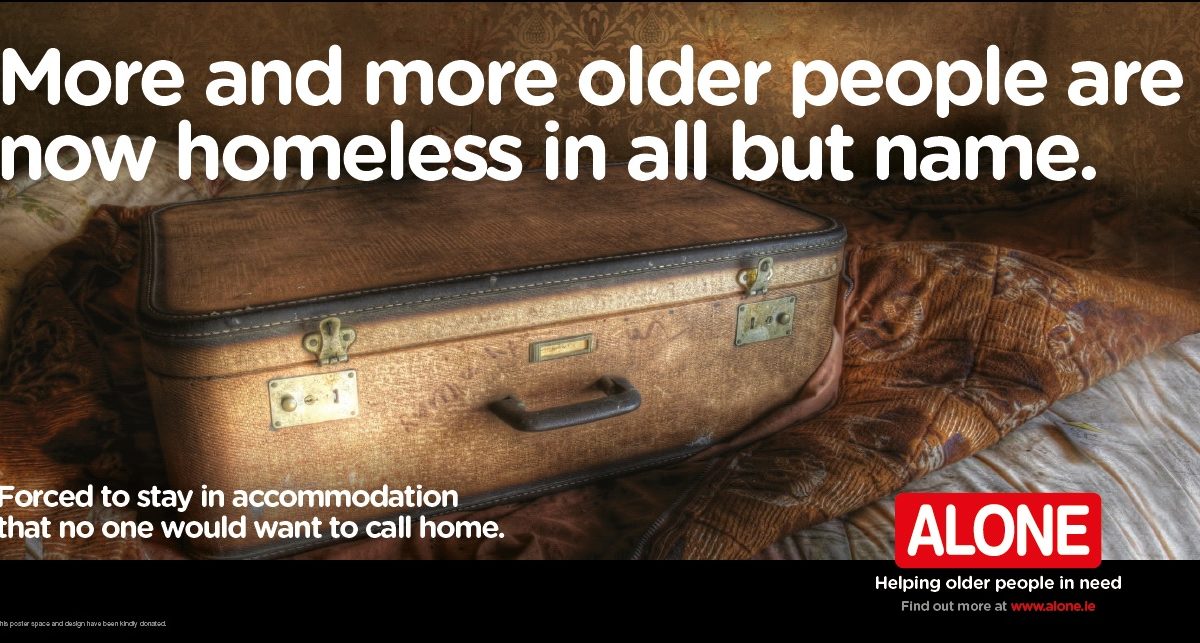 16th November 2015 ALONE have gathered the support of 1,000 people for their ‘homeless in all but name’ campaign, highlighting Ireland’s mounting crisis around housing our older people. ALONE’s Annual Report,  revealed that over 50% of all calls received by ALONE in 2014, were directly related to homelessness or housing. The number of older people coming to ALONE in need of housing increased by 90% in 2014.

Sean Moynihan, CEO of ALONE said, “All of our services focus on supporting older people to age at home, however, in recent times, the number one issue that people have been presenting with is housing.  Whether they are homeless, living in emergency accommodation, living in unsuitable or unsafe housing – housing is a critical issue for the people that we work with. It’s great to have so much public support for this campaign”.

Moynihan continued, “We are asking the government to plan effectively for the housing needs of our ageing population, as a nation, we need to do better by our older people. The private rental market is simply not suitable for older people as many will have support needs as they age, we need to plan for suitable housing with supports.  There should be a detailed housing strategy for our ageing population with the number social housing units ring -fenced, mirroring the population in each council area.”

Charles is 67 and has been living with his brother for 15 years ever since his marriage broke down. The house is overcrowded as there are 4 other adults in the house. Charles does not have a good relationship with his brother and has to leave the house every morning before nine and is not allowed back until the evening time.  Due to the tense atmosphere in the house and the strain on his family relationships. He currently suffers from health issues due to the stress of his living arrangements.

Saoirse is 77 and has recently returned back to Ireland after living away for some years.  She was working abroad until she became ill and had to return to Ireland.  Her health has since deteriorated; Saoirse has many health issues, resulting in depression and stress. Saoirse now rents privately but she cannot afford the rent and has been given notice to leave by the end of 2015. Saoirse does not know where she can go and knows that she won’t be able to find affordable accommodation. Despite feeling vulnerable and lonely Saoirse remains determined to help her situation.

Moynihan concluded, “We ask the government to designate a portion of all social housing units for use by older people. We need to have a system that supports older people, and allows them to pay a fair rent for accommodation that is suitable to their needs. We are failing any older person who is living in shared emergency accommodation, or who can only afford a third floor apartment despite their mobility difficulties. These are not isolated occurrences and we need to act now”.

To support the campaign, sign the online petition at: www.ipetitions.com/petition/alone-homeless-in-all-but-name